AIRBUS failed to end their jinx in meetings with Llandudno as they went down to a 3-2 home defeat at the Hollingsworth Group Stadium.

An outrageous 45-yard goal from Lewis Buckley proved decisive in a closely-fought and exciting encounter which left the Wingmakers empty-handed for the fifth time in six meetings with Alan Morgan's side since they were promoted to the Welsh Premier League.

Despite dominating the first half, once again Airbus were forced to rue errors which gifted the Seasiders two goals.

From a well-worked Leo Riley corner in the sixth minute, Marc Williams saw his 12-yard shot parried by keeper Ryan Neild and brother Mike Williams seized on the rebound to find the back of the net via the outstretched leg of Bailey Jackson.

But the hosts levelled the score on 26 minutes when Ryan Fraughan squad the ball just outside the box for Edwards to send a curling shot into the far top corner for his third goal in two games.

Llandudno regained the advantage eight minutes before the break with a scrambled goal. A James Joyce cross from the left was palmed away by Neild but rebounded off Riley before finding the back of the net.

The visitors enjoyed a good spell after after half-time with Neild making a diving save from Riley before John Owen clipped the bar with a good effort.

Marc Williams fired a shot just over over the angle and Owen fired across the face of the home goal before Buckley, from inside the centre circle, spotted Neild off his line and fired a Beckham-esque shot over the hapless keeper.

The Wingmakers keep pressing and gave themselves hope nine minutes from time when a Ryan Fraughan free-kick was headed home by Matty McGinn, but they were unable to find an equaliser to end their poor run against the visitors. 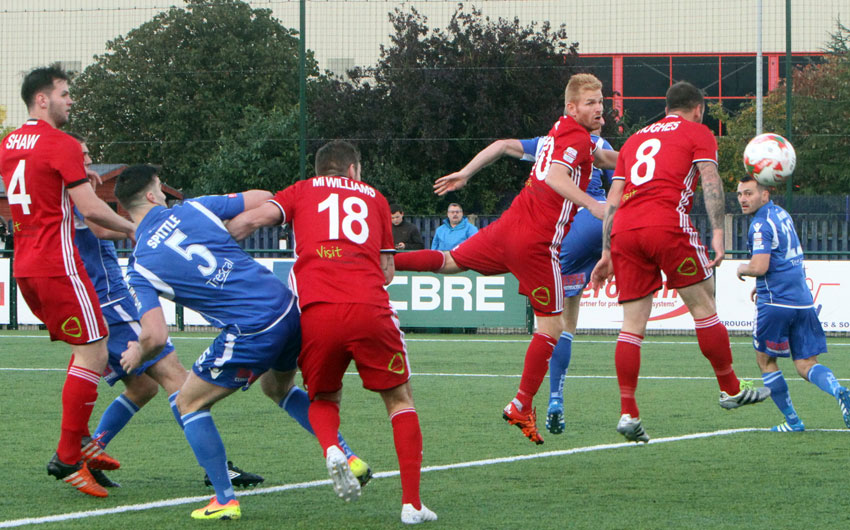