AIRBUS UK bowed out of the Europa League at the first stage for the third successive season but produced a valiant display in Zagreb to draw 2-2 with Lokomotiva.

Trailing 3-1 from the first leg, the Wingmakers threatened an unlikely fightback in the return in Croatia.

Airbus were on the front foot in the first half with Ryan Wignall going close after keeper Oliver Zelenika had dropped the ball while Wayne Riley twice fired over.

Tom Field then rattled the home crossbar with a free kick, but the breakthrough came a minute into the second half when Wignall crossed for Chris Budrys to head home.

Just as in the first leg, Lokomotiva were stirred into action by going behind and upped their game, with Ivan Fiolic going close before making no mistake on 65 minutes while sub Marko Kolar was denied as James Coates superbly pushed his shot onto the upright.

Damir Sovsic, who made the difference in both legs, then put the hosts in front with a strike from the edge of the box, but Airbus showed their resilience when Andy Jones nodded in a long throw from Matty McGinn moments later.

Budrys, Wignall and sub Ryan Wade almost won it late on for the Wingmakers who can take plenty of credit for their display.

Photo (above): Andy Jones heads the equaliser and (below) Tony Gray fires in a shot. 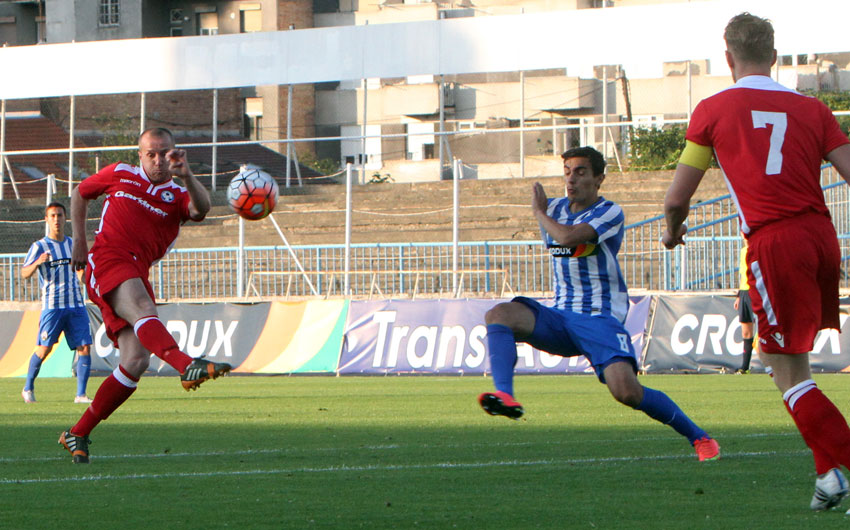